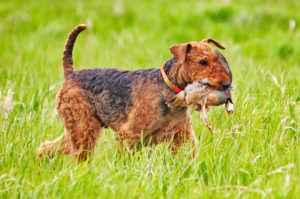 The 2017 Randy Cooley Memorial Hunt Test took place at Rock River Kennels, in Beaver Dam, WI. Photography was made May 20, 2017, at the Junior/Senior field. The weather was wet and rainy.

The Airedale Terrier was developed in in England in the mid-19th century specifically for hunting both fur and feathered game. The men who began the blend of breeds that was to become the Airedale Terrier were not gentlemen of the sporting world, but rather practical farmers who needed a game dog that would go after vermin as well as bring in birds for their table.

The Airedale Terrier began to be imported into the US in the mid 1880’s and was recognized by the American Kennel Club (AKC) in 1988. A further insurgence of the Airedale into North America in the early 20th century brought expanded hunting opportunities for the breed. The Airedale’s outstanding performance, both as an efficient farm dog and as hunter of “big game” such as bear and wildcat, soon shaped the breed’s reputation. However, early accounts of Airedales hunting also regularly included references to the breed’s abilities as a gun dog, used to flush and retrieve a variety of upland birds and water fowl. In the May 1909 issue of Country Life in America, Airedales were described as “having a very strong hunting instinct, with few dogs better equipped for shooting over in the cover or in the open. The Airedale’s speed, endurance, and imperviousness to climactic conditions fit him for bird hunting. He loves the water and can stay in it by the hour on the coldest winter day, making an ideal dog for snipe or to retrieve ducks and geese”. While traditional sporting breeds such as retrievers and spaniels shaped public perception of a “gun dog”, there have always been a number of fanciers who continued to use Airedales as bird dogs.

By the mid-1980’s some of these fanciers met through their participation in Airedale Terrier Club of America (ATCA) activities. They determined that there was significant interest among fellow breeders in preserving and developing the Airedale’s hunting abilities. So, in 1985, the ATCA Hunting/Working Committee (the HWC) was formed by the club’s board.of directors.

Meanwhile, in the mid 1980’s, the AKC began holding hunt tests for dog breeds belonging to their “Sporting Group”. Hunting tests for retrievers, spaniels and pointing breeds were devised and run that allowed dogs to earn AKC hunting titles for the first time. The Hunting/Working Committee did not think the Airedale fit into any of these three categories, believing instead that the best way to truly test a hunting Airedale was to test the breed’s skill at hunting fur, upland birds and water fowl, a three-in-one gun dog test.

One of the first acts of the HWC was to apply to the AKC for them to hold a three-in-one test just for Airedales. The request was denied. Instead, the AKC encouraged the HWC to develop and hold its own club hunt tests. So, in 1986, the HWC held its first national Hunting Working Weekend in Ohio. The event was improved in 1989 when the HWC instituted AKC approved guidelines for their club tests. It was improved again in 1993 when official ATCA Hunt Tests and Hunt Titles became a reality. These ATCA tests showcased the Airedale’s ability to flush and retrieve as well as track and trail fur bearing game. Dogs who successfully completed tests at ATCA sanctioned events received Flushing, Retrieving, and Fur titles from the Airedale Terrier Club of America.

Years of hard work and perseverance by many ATCA members paid off in July of 2009, when Airedales became eligible to earn AKC Hunting Test titles through their upland hunt tests for Spaniels program. With this one decision by the AKC to include our breed, a whole new world opened for Airedales as they instantly became recognized by the entire hunting public as legitimate gun dogs! Today there are many training and testing opportunities open to Airedales that were not available prior to 2009.

One of the ongoing ATCA Hunting and Field Committee events is the Randy Cooley Memorial Hunt Test, held every May near the town of Beaver Dam, Wisconsin, North of Madison. Randy had started a regional ATCA hunting test in Wisconsin in 1998. Sadly, he died suddenly of a heart attack in 2002. The following year the ATCA decided to carry on the hunt test in his honor. In 2010 we celebrated the 8th year of the Randall Cooley Memorial Hunt Test by holding the test as a licensed AKC Spaniel test for the first time. Randy would be very proud to be part of what the event has become and the ATCA is proud to hold the test in his memory.

As Airedales have trained and competed side by side with Spaniels breeds, they have earned respect and acceptance within that community. The Spaniel community has been exceptionally welcoming and helpful to Airedale handlers. Their mentoring of the ATCA Hunting and Field Committee has been noteworthy and generous. To find AKC Spaniel Hunting Tests or Clubs near you, follow the link below to the AKC website and search ‘Spaniel Hunting Tests’ or ‘Spaniel Clubs’ under the “Events Search” button. Also if you’d like to learn more about the working history of the Airedale Terrier breed, see the link below.

The ATCA Hunting and Field Committee is a group of breeders, hunters and hunt testers who are committed to preserving and promoting the Airedale Terrier’s hunting abilities. We promote the breed through continued involvement in Pheasants Forever’s National Pheasant Fest where we operate an Airedale Terrier information booth, and by running our own dogs and encouraging others to run in AKC hunt tests. We also mentor people new to training an Airedale for hunting by providing information about spaniel clubs, retriever clubs, professional trainers, recommended training books and anything else Airedale as needed.

For information on any of these events look for the link below or contact Scott Lichty, Hunting and Field Committee Chair. lichsmit@msn.com

Use the above link to read more about Dave Morgan’s Senecas Have Gun Will Travel.

Article entitled:  “Airedales in the Field”

Join the ATCA and Become an Active Member Today!